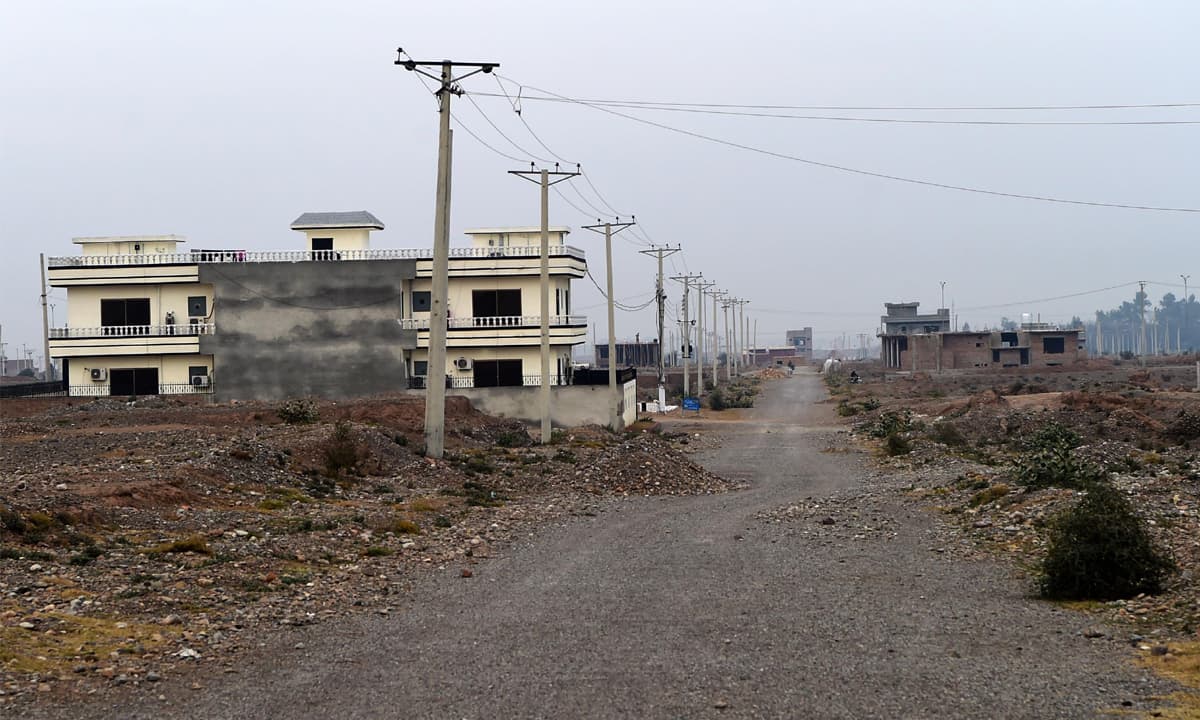 Officials in Peshawar, in the meanwhile, blame their demands for having held back an ambitious government-planned housing scheme – almost double the size of the city’s well-known residential area, Hayatabad Township – for almost three decades.

Kukikhels are a branch of the Afridi tribe that live in a tribal district to the west of Peshawar. They claim that two of the five proposed zones of the housing scheme, called Regi Model Town, are situated on the lands they own. “We have our houses in both the zones,” says Haji Barkat Afridi, a tribal elder. “We will never vacate this land since we have the proprietary rights to it,” he says.

Their land ownership claims are much older than the housing scheme. These, in fact, go back to 1912 when, in order to address conflicting claims of the residents of Peshawar district and its adjoining Khyber Agency, the then deputy commissioner of Peshawar, Sir Ralph Edwin Hotchkin Griffith, and the then political agent of Khyber Agency, Sir John Maffey, unanimously prepared a map. Mandated by what is known as the Maffey-Griffith Award, the map resulted in the construction of 23 pillars meant to mark the boundary between the two areas.

The dispute erupted again in 1964 when Kukikhels objected to a decision by the provincial government of Khyber Pakhtunkhwa (then known as North West Frontier Province or NWFP) to acquire 868 acres of land along the Peshawar-Jamrud highway. The land was acquired for setting up an industrial estate and, as per the provincial authorities, its price was paid to its owners who, according to land revenue records, were all residents of Peshawar district.

Kukikhels contested these records. They insisted that the acquired land actually belonged to them and demanded that the provincial government pay them compensation for acquiring it and also sign a lease agreement with them. To make themselves heard, they approached the then NWFP governor who directed the administrations both in the district and the agency to visit the disputed area and trace the boundary pillars built under the Maffey-Griffith Award. The authorities could trace only seven of the 23 pillars. They also found a boundary line which they claimed was identical to the one drawn under the 1912 award. On the basis of the two findings, they concluded that only a couple of industrial units – out of a few hundred – were located on the land owned by Kukikhels.

The then political agent of Khyber Agency found this conclusion anomalous. In an official dispatch that he sent to the secretary of the NWFP governor in February 1977, he explained what “has caused complications” is that the line drawn in “1912 was not implemented in the maps of the revenue records”. In other words, the land that the Maffey-Griffith Award identified as belonging to Kukikhels was still shown in the records as belonging to the residents of Peshawar district.

Subsequently, in April 1977, the then NWFP governor directed the provincial authorities to implement the Maffey-Griffith line, both on the ground and in the revenue records. The objective of the directive was “to establish the proprietary rights of the Afridis” as well as those of the residents of Tehkal and Achini villages.

The directive was never implemented.

In the late 1980s, the dispute surfaced again after the Peshawar Development Authority (PDA) decided to allocate hundreds of acres of land to Regi Model Town in Regi Lalma area bordering Jamrud. Kukikhels again objected. Their elders held several meetings with senior government officials but could not have their reservations addressed. In 2011, they moved the Peshawar High Court.

Two years later, the court ordered the Khyber Pakhtunkhwa chief secretary to hold a meeting immediately to clearly identify the Maffey-Griffith line “which is an undisputed demarcation line for both the parties”. The court also directed that the line, once demarcated, should be marked with concrete pillars.

The Khyber Pakhtunkhwa government did not implement the order. Another two years afterwards, Kukikhels held a sit-in protest outside the residence of Pakistan Tehreek-e-Insaf (PTI) Chairman Imran Khan in Bani Gala, Islamabad. Khan was a leader of the opposition in the National Assembly at the time but his PTI was in power in Khyber Pakhtunkhwa.

In May 2015, he met Kukikhel elders in the company of the then Khyber Pakhtunkhwa Chief Minister Pervez Khattak, senior provincial minister Inayatullah, local government department secretary and the PDA’s director general. The participants of the meeting reached the same conclusion that authorities had reached earlier — that the dispute would be resolved in line with the Maffey-Griffith Award.

Consequently, a one-member inquiry commission, manned by a Peshawar-based district and sessions judge, was constituted under the West Pakistan Tribunal of Inquiry Ordinance 1969. “It was decided that the commission would be given a single [term of reference] — that is, the restoration of the Maffey-Griffith line,” says Malik Naseer, chief of the Kukikhel tribe.

The town, unlike the adjacent Hayatabad Township that was developed in various phases, was to be originally developed in one big go. Its main objective was to stem the spread of unplanned urbanisation and provide housing facilities complemented by planned infrastructure, civic amenities and commercial areas.

Till a few years ago, Regi Model Town was almost a desolate piece of land. In recent times, its Zone-III and IV have started showing some signs of life. Scores of houses have reached completion stage while many more are under construction. In total, around 300 houses have been constructed (though no commercial areas, schools, hospitals and other civic facilities have been built yet). Trees of various types, sown years ago, have also come of age in these zones, adding some greenery to the landscape. Main and link roads, too, have been constructed in these two zones — as well as in Zone-I.

If, however, one is to look at Regi Model Town from Ghundi area in Jamrud tehsil, it still appears as an undeveloped piece of land. Within what would be its Zone-II and Zone-V, various cemented and mud (housing) structures stand haphazardly. Vast pockets of land around them are empty — but under the possession of Kukikhel tribespeople.

While part of the blame for the delay in the completion of the housing scheme can be placed on the land dispute, there is no explanation by the authorities as to why they have failed to construct markets, educational institutions, parks and healthcare facilities in the rest of Regi Model Town. Officials at the PDA cite financial constraints as a major reason for their failure to make these facilities available. Over the years, the cost of developing the housing scheme has been revised multiple times and – according to the latest official estimates – stands at a staggering 23.8 billion rupees. The city authorities do not seem to have that amount of money.

While the absence of civic infrastructure explains why people are reluctant to build houses in Regi Model Town, senior PDA officials allege that it is the land dispute that is delaying development work.

Dr Shahid Karim, who works as the PDA’s director estates, says the budget allocations for the scheme have been hampered by the conflicting ownership claims. He cites compensation demands by Kukikhel tribespeople to substantiate his argument. The law, he says, does not allow the PDA to pay twice for the same land since it has already compensated the residents of Tehkal village for acquiring the land for Zone-II and Zone-V.

Karim describes the Maffey-Griffith line as an imaginary one and cites provincial land revenue records to claim that the disputed land actually belongs to villagers living in Peshawar district. “We can only compensate Kukikhels for the structures they have constructed on this land,” he says. He, however, concedes that it is impossible for the PDA to evict the tribespeople without a settlement of the dispute.

The delay in the completion of the scheme, meanwhile, is leading to a large-scale conversion of agricultural land into unplanned residential areas. The PDA data shows that a total of 174 square kilometers of agricultural land has been converted into residential areas in Peshawar division – comprising the districts of Peshawar, Charsadda and Nowshera – between 2008 and 2018.

Regi Model Town, ironically, was planned to check exactly this type of urbanisation.

The past, present and future of feminist activism in Pakistan