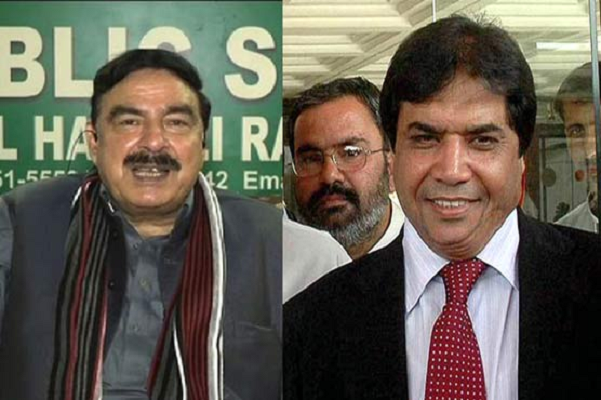 In the petition filed through his counsel Sajeel Sheryar Swati, Rashid questioned the federal government’s appointment of Hanif Abbasi, stating that the office of the SAPM required the selection of “people possessing high virtues and strong moral fibre…to these important public offices.”

The petitioner contended that Abbasi, “a person with a criminal conviction, particularly a conviction for dealing in narcotics which is an offence involving ‘moral turpitude’,” is unsuitable to hold such a position.

In his petition, Rashid argued that the SAPM’s office was one of the few public offices recognised and identified by the provisions of Article 260 of the Constitution. It furthered that while the PML-N leader was convicted and sentenced for the offences registered against him, the Lahore High Court’s (LHC) suspension of the sentence did not forgive his conviction.

“In criminal jurisprudence, there is indeed a marked difference between conviction and sentence. Conviction is finding someone guilty positively of the offence(s) charged with, whereas sentence is the punishment (imprisonment or fine or both) for being guilty of that offence. The Honourable Lahore High Court only suspended the sentence of the Respondent No.2 [Hanif Abbasi] meaning thereby that he still carries the conviction. Therefore, for all intents and purposes, Respondent No.2, being a convict, is disqualified from holding the public office of Special Assistant to the Prime Minister,” the petition read.

The petition lambasted Prime Minister Shehbaz Sharif’s judgement stating, “although the Prime Minister’s discretion to appoint Special Assistants is apparently without codified conditions or limitations but in essence, this discretion is neither ‘unfettered’ nor ‘absolute’.”

Rashid, who also heads the Awami Muslim League (AML), furthered that the premier is subject to exercise the discretion reasonably, lawfully and constitutionally – to appoint a person who is fit to hold such high public office and is not otherwise disqualified from holding such office.

“Unfortunately, by appointing a convict (that too in narcotics case), the Prime Minister has not only misused his authority but also made a mockery of the rule of law and the Constitution,” it maintained.

It was further argued that the appointment stands in contravention to the judgment of the Honourable Supreme Court reported as PLD 2021 SC 379, Munsif Awan, Advocate v FoP which notes that there are limits to the discretion, particularly where the appointees “suffer from any blot or blemish on their names or reputation for having been convicted for an offence of any nature or are under a cloud for having committed an illegality for which they have been convicted by a court of competent jurisdiction…”

The petition contended that Hanif Abbasi is not in “consonance with the principles of good governance or the rule of law and also rests on the abuse of discretion vested in the Prime Minister.” Adding that in such, cases the courts of this country never “shy away from setting aside patently illegal and unconstitutional appointments, upholding the emblem of Constitution and the rule of law.”

In 2018, an anti-narcotics court handed down life imprisonment to Hanif Abbasi in the eight-year-old ephedrine case.

According to the judgment that was issued late at night, Abbasi, who was the PML-N candidate from NA-60 against the AML chief Sheikh Rashid Ahmed, had failed to defend himself, and the charges levelled against him had proven to be true.

However, in 2019, the LHC had suspended the PML-N leader’s life sentence in the ephedrine quota case and ordered his release on bail.